Hazard functions are a key tool in survival analysis. But they’re not always easy to interpret.

In this article, we’re going to explore the definition, purpose, and meaning of hazard functions. Then we’ll explore a few different shapes to see what they tell us about the data.

This is a simple distribution of survival probabilities across age. It could be survival of a battery after manufacture, a person after a diagnosis, or a bout of unemployment.

It is unrepresentative, but easy to work with. For anyone who is curious, this curve represents a Weibull distribution with a shape parameter of 1.6 and a scale parameter of 36.

The curve is the probability density function, a commonly used function where areas under the curve represent probabilities of falling within a particular interval.

This is the survival function, or the complement of the cumulative distribution function. The Y-axis here is the proportion of the sample who is still alive. The X axis is age.

It starts at 1 because everyone is alive at time zero, and gradually declines to zero, because no one is immortal.

Here is a plot that shows that the probability of death between the ages of 20 and 30 is about 1 in 5.

This plot shows that the probability of death between the ages of 40 and 60 is also about 1 in 5.

There are three problems with trying to compare these events.

The hazard function fixes the three problems noted above.

, is an adjustment for the number of people still alive at time t.

, is a rate and not a probability because we divide by the width of the interval.

, insures that the calculation is done over a narrow time interval.

The limit may remind you of formulas you’ve seen for the derivative in your Calculus class (if you took Calculus). If you remember those days of long ago, you may be able to show that 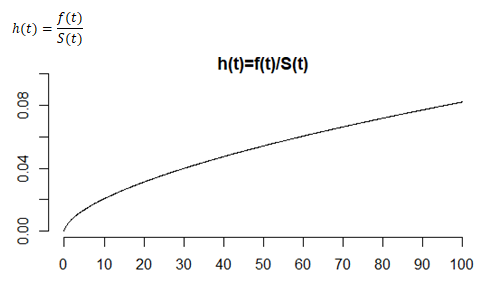 This is what the survival function looks like for our particular example. The hazard function here is much less than one, but it can be bigger than one because it is not a probability. Think of the hazard as a short term measure of risk. In this example, the risk is higher as age increases.

Why is the hazard function important?

The shape of the hazard function tells you some important qualitative information about survival. There are four general patterns worth noting.

The hazard function shown above is an example of a monotone increasing hazard. The short-term risk of death at 20, given that you survived until your 20th birthday, is about 0.031. But at the age of 40, your hazard function is 0.047.

That means that your short-term risk of death given that you survived until your 40th birthday is worse. The advertising phrase, “You’re not getting older, you’re getting better” doesn’t really apply.

You’ve done well to make it this far, but your short term prospects are grimmer than they were at 20, and things will continue to go downhill. This is why life insurance costs more as you get older.

In a manufacturing setting a monotone increasing hazard function means that new is better than used. This is true for automobiles, for example, which is why if I wanted to trade in my 2008 Prius for a 2020 model, I’d have to part with at least $20,000 dollars.

Batteries also follow a monotone increasing hazard. I have four smoke alarms in my house and the batteries always seem to fail at 3am, necessitating a late night trip to get a replacement. If I was smart, I’d have a stock of extra batteries in hand.

But another strategy would be that when one battery fails at 3am, I should replace not just that battery, but the ones in the other three smoke alarms at the same time.

The short term risk is high for all batteries so I would be throwing away three batteries that were probably also approaching the end of their lifetime, and I’d save myself from more 3am failures in the near future.

The longer these systems survive without failure, the tougher they become. This evokes the famous saying of Friedrich Nietzsche, “That which does not kill us, makes us stronger.”

Better for it to fail on the factory floor where it is easily swapped out for another system. The systems that do get shipped after 48 are tougher and more reliable than ones fresh off the factory floor, leading to a savings in warranty expenses.

In some settings, the hazard function is constant. This is a situation where new and used are equal. Every product fails over time, but the short term risk of failure is the same at any age. The rate at which radioactive elements decay is characterized by a constant hazard function.

Radon is a difficult gas to work with because every day about 17% of it disappears through radioactive decay.

After two weeks, only 7% of the radon is left. But the 7% that remains has the same rate of disappearance as brand new radon. Atoms don’t show any effects, positive or negative, of age.

Getting back from machines to humans, your hazard function is a mixture of early decreasing hazard and late increasing hazard. That’s often described as a “bathtub” hazard because the hazard function looks like the side profile of a bathtub with a steep drop on one end and a gradual rise to the other end.

But gradually, as parts of your body tend to wear out, the short term risk increases again and if you live to a ripe old age of 90, your short term risk might be as bad as it was during your first year of life.

I’m not an actuary, so I apologize if some of my characterizations of risk over age are not perfectly accurate. I did try to match up my numbers roughly with what I found on the Internet, but I know that this is, at best, a crude approximation.

The other reason that hazard functions are important is that they are useful in developing statistical models of survival.

The general shape of the hazard function–monotone increasing, monotone decreasing, bathtub–doesn’t change from one group of patients to another. But often the hazard of one group is proportionately larger or smaller than the others.

If this proportionality in hazard functions applies, then the mathematical details of the statistical models are greatly simplified.

It doesn’t always have to be this way. When you are comparing two groups of patients, one  getting a surgical treatment for their disease and another getting a medical treatment, the general shapes might be quite different.

Surgery might have a decreasing hazard function. The risks of surgery (infection, excessive bleeding) are most likely to appear early and the longer you stay healthy, the less the risk that the surgery will kill you.

The risks of drugs, on the other hand, might lead to an increasing hazard function. The cumulative dosages over time might lead to greater risk the longer you are on the drugs.

This doesn’t always happen, but when you have different shapes for the hazard function depending on what treatment you are getting, the analysis can still be done, but it requires more effort.

You can’t assume that the hazards are proportional in this case and you have to account for this with a more complex statistical model.

When you can assume that the hazard functions are proportional between one group of patients and another, then your statistical models are greatly simplified.