Yes, absolutely! Understanding experimental design can help you recognize the questions you can and can’t answer with the data. It will also help you identify possible sources of bias that can lead to undesirable results. Finally, it will help you provide recommendations to make future studies more efficient.

The Three Rs of Experimental Design

An experiment involves one or more treatments, each with two or more conditions. The defining characteristic of an experiment is that the researcher is able to assign subjects to treatment groups.

There are three principles that underlie any experiment. These are often called the three Rs of experimental design, and they are:

Let’s look at each principle in the context of a specific experiment.

In this experiment, a researcher assigned each subject to one of two different exercise training groups. The goal of this experiment is to compare their time to run a mile after training for four weeks. 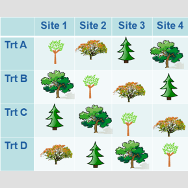 Randomization is the assignment of the subjects in the study to treatment groups in a random way. This is one of the most important aspects of an experiment.

It ensures that the only systematic difference in groups is the treatment condition. In the training experiment, this would mean that any difference in the outcomes between the two groups is due to the training. In other words, random assignment allows you to demonstrate causation.

Suppose the researcher did not randomize, and assigned men to one group and women to the other group. It should be clear that we won’t know if differences between the treatment groups come from gender or training.

Although in this example our confounding variable, gender, is obvious, that’s not always true. Randomization is the only sure way to avoid accidental confounding and its resulting bias.

Suppose the training study had limited resources. Would it be enough to recruit only two people, and compare their times after training? Again, it’s probably obvious you can’t do this. The difference in outcomes would depend as much on those two people as it would on the training method.

There are many considerations that go into determining sample size. Generally, though, more subjects per group means more statistical confidence in the outcomes. Too few subjects in a group makes it very hard to find differences in the outcomes between treatment groups.

Reduction of variance refers to removing or accounting for systematic difference among subjects. This allows you to measure the differences due to the treatment more precisely. There are multiple ways to approach this.

One way is to limit the population of the study so the subjects are more similar. Another way is to incorporate covariates into the analysis. These are variables outside of the experimental design that you can measure.

A third way is blocking. This refers to identifying related subjects and randomly assigning them to different treatments.

In the training experiment, not accounting for gender could make it more difficult to estimate the effects of training. There are at least three ways to account for it in the design and data collection.

Although there are many types of experimental designs, the three Rs are at the heart of each of them. Advanced experimental designs simply achieve these under complicated circumstances. Understanding these principles, even without advanced knowledge, will make you a better analyst.

Always answer the following questions any time you are analyzing experimental data:

1. How was randomization applied in the experiment?
This will help you understand whether you can draw causal conclusions. It will also help you recognize if the general conclusions of the study could be biased.

2. How much replication was there in the experiment?
If the number of subjects was small (overall or in certain groups), this could result in a lack of findings.

3. Was variability outside of the scope of the experiment appropriately reduced?
If the researcher can account for outside factors in the future, this will make the experiment more efficient.