SPSS offers two choices under the recode command: Into Same Variable and Into Different Variables.

In almost every situation, you want to use Into Different Variables. Recoding Into Same Variables replaces the values in the existing variable.

So if you notice a mistake after you’ve recoded, you can’t fix it.

But you may not even notice the mistake, because you can’t even test it.

So do not recode over an existing variable unless you are absolutely certain that the lost information will never be needed.

Here is an example of how to do it in the menus.  This is from the General Social Survey data set that comes along with SPSS.  In it, I am recoding Educ, Years of Education, into 5 categories: Less than High School, High School Grad, Some College, Bachelor’s degree, More than college.

This dialog window will come up: 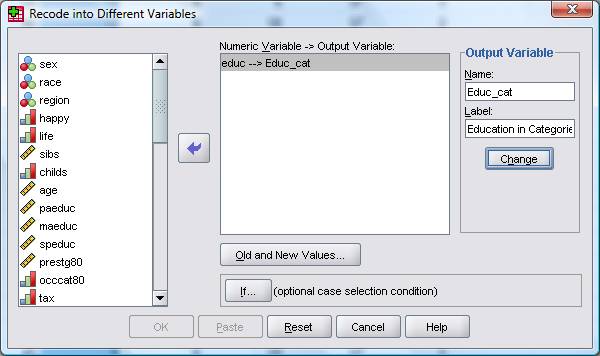 I filled in the following:

This Dialogue Window will pop up: 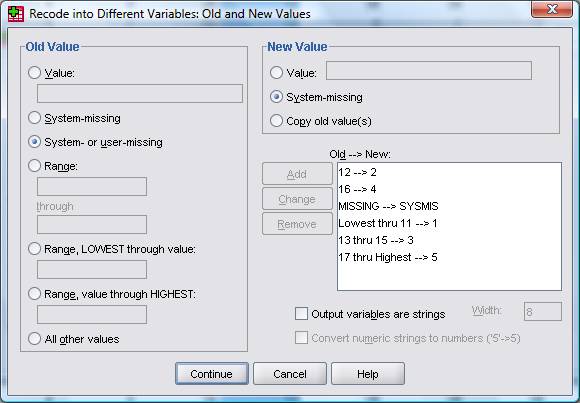 Fill in the following:

Click OK
Or, you could do all of that in just a few lines of very logical syntax code:

If you don’t have many variables to recode, say one or two, it’s not a big deal to use the menus (but at least paste the code, so you have a record of what you did later!).

But if you have more than just one or two, all those mouse-clicks get old, fast.

And if you need to go back and change your coding scheme, say to combine two small categories, it’s a quick matter to update the code.  In the menus you have to start over.

(And of course, once you recode, you should immediately enter value labels and test your syntax to make sure it worked.  Both are easy to do with syntax).

Want to learn more? If you’re just getting started with data analysis in SPSS, or would like a thorough refresher, please join us in our online workshop Introduction to Data Analysis in SPSS.

Getting Started with SPSS
Karen will introduce you to how SPSS is set up, some hidden features to make it easier to use, and some practical tips.