Is it really ok to treat Likert items as continuous? 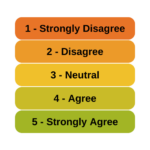 And can you just decide to combine Likert items to make a scale? Likert-type data is extremely common—and so are questions like these about how to analyze it appropriately. END_OF_DOCUMENT_TOKEN_TO_BE_REPLACED

There are not a lot of statistical methods designed just to analyze ordinal variables.

But that doesn’t mean that you’re stuck with few options.  There are more than you’d think.

Some are better than others, but it depends on the situation and research questions.

Here are five options when your dependent variable is ordinal.
END_OF_DOCUMENT_TOKEN_TO_BE_REPLACED

A great tool to have in your statistical tool belt is logistic regression.

It comes in many varieties and many of us are familiar with the variety for binary outcomes.

But multinomial and ordinal varieties of logistic regression are also incredibly useful and worth knowing.

They can be tricky to decide between in practice, however.  In some — but not all — situations you END_OF_DOCUMENT_TOKEN_TO_BE_REPLACED

I received the following email from a reader after sending out the last article: Opposite Results in Ordinal Logistic Regression—Solving a Statistical Mystery.

And I agreed I’d answer it here in case anyone else was confused.

Karen’s explanations always make the bulb light up in my brain, but not this time.

A number of years ago when I was still working in the consulting office at Cornell, someone came in asking for help interpreting their ordinal logistic regression results.

The client was surprised because all the coefficients were backwards from what they expected, and they wanted to make sure they were interpreting them correctly.

It looked like the researcher had done everything correctly, but the results were definitely bizarre. They were using SPSS and the manual wasn’t clarifying anything for me, so I did the logical thing: I ran it in another software program. I wanted to make sure the problem was with interpretation, and not in some strange default or END_OF_DOCUMENT_TOKEN_TO_BE_REPLACED