I’m a big fan of Analysis of Variance (ANOVA). I use it all the time. I learn a lot from it. But sometimes it doesn’t test the hypothesis I need. In this article, we’ll explore a test that is used when you care about a specific comparison among means: Dunnett’s test.

Recall the null hypothesis test for analysis of variance.

It gets messy very fast. That’s okay. If you have a lot of groups that you are comparing, you have to make a lot of comparisons. Or do you?

The hypothesis that compares to a control group

If one of your groups is a control or placebo, AND you want only to compare each treatment to the control, this is what the hypothesis looks like, assuming that the control is group #1.

Dunnett’s test is easy to implement. Calculate the traditional measures in analysis of variance, including mean squared error (MSE). You can skip the F Test that you see in most ANOVA tables. It won’t hurt your overall alpha level, as long as you only look at each treatment versus the control.

Most statistical software packages will include Dunnett’s test as an option for ANOVA. Just remember that you don’t need to use the initial F test as a screen before jumping into Dunnett’s test.

An Example of Dunnett’s Test

Disinfection is important, but does it reduce the tensile strength of the ligatures? Here are the summary statistics for the maximum strength measurement.

The paper does not include the raw data, but you can still calculate all the key statistics needed to run Dunnett’s test. You can then create a simple graph that identifies if any of the disinfection protocols shows significantly less strength than the control. 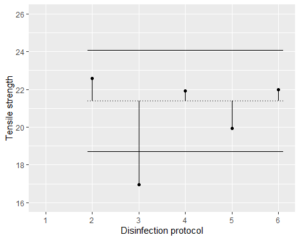 The dotted line is the mean for the control group. Any mean falling outside the solid lines is statistically significantly different from the control mean. Notice that there is no comparison at 1 because you don’t compare the control group to itself.

Things get a bit dicey when the group sizes are unequal. The formulas get a bit messier and the intervals are approximate. This is generally true for most approaches to handling multi-group data.

Keep in mind that you lose something when you simplify the hypothesis. Suppose you have six groups, a control and five different treatments. Now imagine that all of the treatments are significantly better than the control group.

Jackpot! Every treatment is worth further study. But Dunnett’s test won’t allow you to see if some of the treatments are better than the others. There is no option for finding the best of the best.

Let’s consider this as a reminder that there is no such thing as a free lunch. There are always trade-offs. No approach is superior in all settings. If, however, you are truly only interested in comparing each treatment to the control and you specify this prior to looking at the data, then Dunnett’s test is a very attractive option.