Unfortunately, categorical response variables are none of these.

No matter how many transformations you try, you’re just never going to get normal residuals from a model with a categorical response variable.

There are a number of alternatives though, and one of the most popular is logistic regression.

In many ways, logistic regression is very similar to linear regression.  One big difference, though, is the logit link function.

All that means is when Y is categorical, we use the logit of Y as the response in our regression equation instead of just Y:

The logit function is the natural log of the odds that Y equals one of the categories.  For mathematical simplicity, we’re going to assume Y has only two categories and code them as 0 and 1.

This is entirely arbitrary–we could have used any numbers.  But these make the math work out nicely, so let’s stick with them.

Why Bother With This Logit Function?

Well, if we used Y as the outcome variable and tried to fit a line, it wouldn’t be a very good representation of the relationship.  The following graph shows an attempt to fit a line between one X variable and a binary outcome Y. 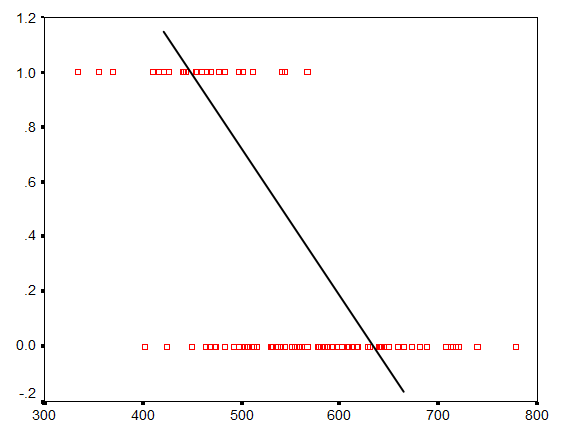 Okay, fine.  But why mess with logs and odds?  Why not just use P as the outcome variable?  Everyone understands probability.

Here’s the same graph with probability on the Y axis: 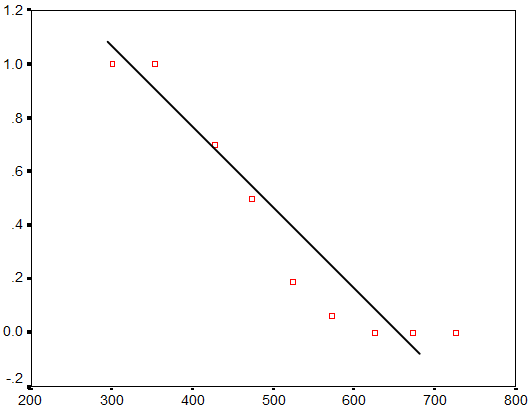 It’s closer to being linear, but it’s still not quite there.  Instead of a linear relationship between X and P, we have a sigmoidal or S-shaped relationship.

But it turns out that there are a few functions of P that do form reasonably linear relationships with X.  These include:

The logit function is particularly popular because, believe it or not, its results are  relatively easy to interpret.  But many of the others work just as well.

Once we fit this model, we can then back-transform the estimated regression coefficients off of a log scale so that we can interpret the conditional effects of each X.