Understanding moderation is one of those topics in statistics that is so much harder than it needs to be.

Here are three suggestions to make it just a little easier.

I have spoken with a number of researchers who are surprised to learn that moderation is just another term for interaction.

Perhaps it’s because moderation often appears with discussions of mediation. Or because we tend to think of interaction as being part of ANOVA, but not regression.

In any case, both an interaction and moderation mean the same thing: the effect of one predictor on a response variable is different at different values of the second predictor.

When we speak of interaction, we don’t usually distinguish between independent variable and the moderator. Either predictor could be considered to “moderate” the effect of the other.

Mathematically, there is no distinction. You don’t have to interpret one variable as the independent variable and the other as the moderator.  But it can help interpretation to think of them that way.

2. Graph the means and/or predicted values

Moderation effects are difficult to interpret without a graph. It helps to see what is the effect of the independent value at different values of the moderator.

If the independent variable is categorical, we measure its effect through mean differences, and those differences are easiest to see with plots of the means.

Moderation says that those mean differences are not the same at every value of the moderator. It can be hard to discern a pattern in how they differ without seeing it.

For example, the mean difference may get larger as the moderator increases. Or it may flip signs. 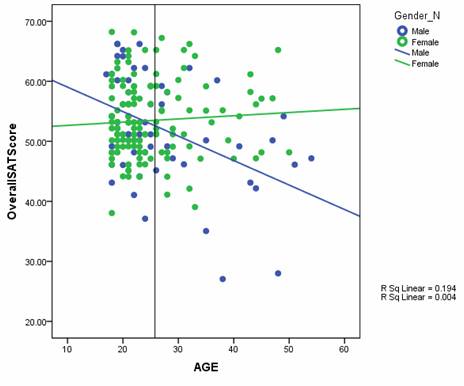 But this is difficult to see without a graph.

If the moderator itself is continuous, you could potentially choose an infinite number of values at which to plot the effect of the independent variable.  Not only would that take a while, the graph would be such a mess, you couldn’t see any patterns.

Luckily, plotting the effects of the independent variable at only a few values of the moderator are usually needed to see patterns.

There are conventions to help you choose the best values of the moderator for plotting predicted values.  But these conventions don’t always work in every situation.

Most of the time, this is a great convention and it works very well.

One situation where it doesn’t is if the moderator is positively skewed. The value one standard deviation below the mean can be beyond the range of the data. In that case, using the minimum or some other small value of the moderator may be a better choice.

Likewise, sometimes very specific values of the moderator are particularly meaningful. For example, in years of education, values of 12 and 16 generally indicate high school and college graduation.

If years of education was the moderator, plotting effects of the independent variable when education equaled 12 makes a lot of sense, even if the mean is 12.57.

It’s not that using 12.57 is wrong. But spending a little time thinking about a more appropriate value can make interpretation, and therefore communication to your audience, easier.