Ever hear this rule of thumb: “The Chi-Square test is invalid if we have fewer than 5 observations in a cell”.

I frequently hear this mis-understood and incorrect “rule.”

We all want rules of thumb even though we know they can be wrong, misleading, or misinterpreted.

Rules of Thumb are like Urban Myths or like a bad game of ‘Telephone’.  The actual message gets totally distorted over time.

So what is the correct message here?

Why is this important? 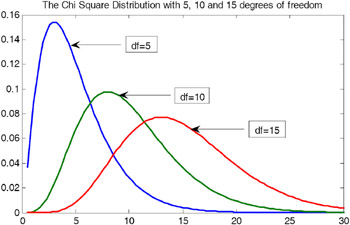 How Many Observations Does a Chi-Square Test Need?

One that is large enough that the expected value for each cell is at least 5. Those expected values come from the total sample size, and the corresponding total frequencies of each row and column. So if any row or column totals in your contingency table are small, or together are relatively small, you’ll have an expected value that’s too low.

Software packages typically supply a warning when this occurs. For example, it’s the criterion SAS uses.

Likewise, 33 are in the A1 category and 15 are in the A2 category. Inside the box are the individual cells, which give the counts for each combination of the two A categories and two B categories.

The more different the observed and expected counts are from each other, the larger the chi-square statistic.

But is 5 the true minimum?

There are other suggested guidelines too.

More recent standards for a 2 x 2 Table (Campbell 2007) say Fisher’s Exact and Yates Correction are too conservative and proposes alternative tests depending on the study design.

In summary, different sources have different criteria for the Chi-square test to be valid. All criteria refer to the expected cell counts and not the observed data.

There are alternative tests for small cell counts such as Fisher’s Exact Test and Yates correction. Lastly, sometimes it might be necessary to collapse across categories to obtain adequate cell counts.

*The ‘5’ probably came from Fisher.