The expression “can’t see the forest for the trees” often comes to mind when reviewing a statistical analysis. We get so involved in reporting “statistically significant” and p-values that we fail to explore the grand picture of our results.

It’s understandable that this can happen.  We have a hypothesis to test. We go through a multi-step process to create the best model fit possible. Too often the next and last step is to report which predictors are statistically significant and include their effect sizes.

I suggest one additional step: take the time to absorb and think about the information you can extract from your model with predicted means.

I use the term “information” because we will not focus on p-values and significance levels. Nor are we summarizing a predictor’s effect simply with a coefficient, but digging deeper into what that coefficient tells us.

In the model below, we are determining which predictors are associated with the number of times someone visits a doctor over a two-week period.

There are four numerical predictors:

Actdays — number of days not active

Medical_advice — Number of times sought medical advice in past two-weeks

There is one categorical predictor:

the type of medical insurance each person has. 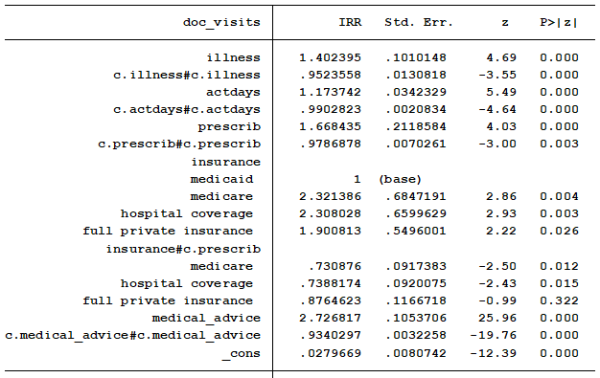 Note that virtually every coefficient is significant. We will report the coefficients, p-values and confidence intervals in the final write up. But the coefficients table doesn’t communicate well what the real effects are. Let’s investigate a bit with some predicted values.

Do people on Medicaid with two and four prescriptions have the same predicted number of trips to the doctor’s office? How does that compare to someone that is on private insurance or Medicare? Do these comparisons differ for people who seek medical an average (.52) or a high (4) number of times?

We will start with the left half of the table for people who seek medical advice an average number of times. The predicted number of visits for people with Medicaid and private insurance about doubles when the number of prescriptions they are taking increase from two to four.

People on Medicare have no increase. However, the predicted total number of visits is still less than 0.5 in all situations.

What happens if we change the number of times someone sought medical advice from the mean of 0.52 to 4 times. Let’s look at the right side.

Interestingly, the predicted number of doctor visits for those on Medicaid more than double while those with Medicare increase only slightly when the number of prescriptions increase from two to four.

Now we have interesting information to give our audience beyond confusing coefficients and p-values. We have brought our numbers and data to life so non-statisticians can learn from our work.

Interpreting Linear Regression Coefficients: A Walk Through Output
Learn the approach for understanding coefficients in that regression as we walk through output of a model that includes numerical and categorical predictors and an interaction.
The Analysis Factor uses cookies to ensure that we give you the best experience of our website. If you continue we assume that you consent to receive cookies on all websites from The Analysis Factor.
Continue Privacy Policy
Privacy & Cookies Policy