Even with a few years of experience, interpreting the coefficients of interactions in a regression table can take some time to figure out. Trying to explain these coefficients  to a group of non-statistically inclined people is a daunting task.

For our model, BMI is our outcome variable. It needs to be a linear regression model because BMI is a continuous variable. To determine if there is a statistical difference in the effect of frame size between men and women we need to include an interaction between the two categorical variables.

The regression table below is a typical example of what all statistical software produce. This one is generated by Stata. 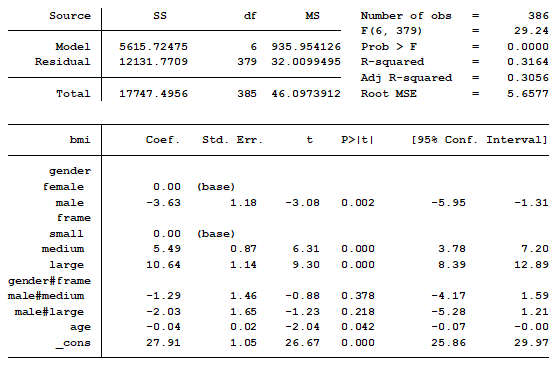 By the time you start explaining the interaction you have lost 95% of your audience. You realize that this approach was a bad idea. Would there have been a better way to present these results?

First rule, always know your audience.  How statistically knowledgeable are they? What are they interested in knowing?

My approach would have been to start by showing them the marginal means for each of the six groups. This table is easy to understand and to interpret.  This is not the default output from the statistical software, but it’s not hard to obtain.

Note that I excluded the t-score and p-values. That information is not important because it tells us whether the marginal mean of each category is significantly different from zero.

I would then graph the marginal means because it’s easier to visualize the results. 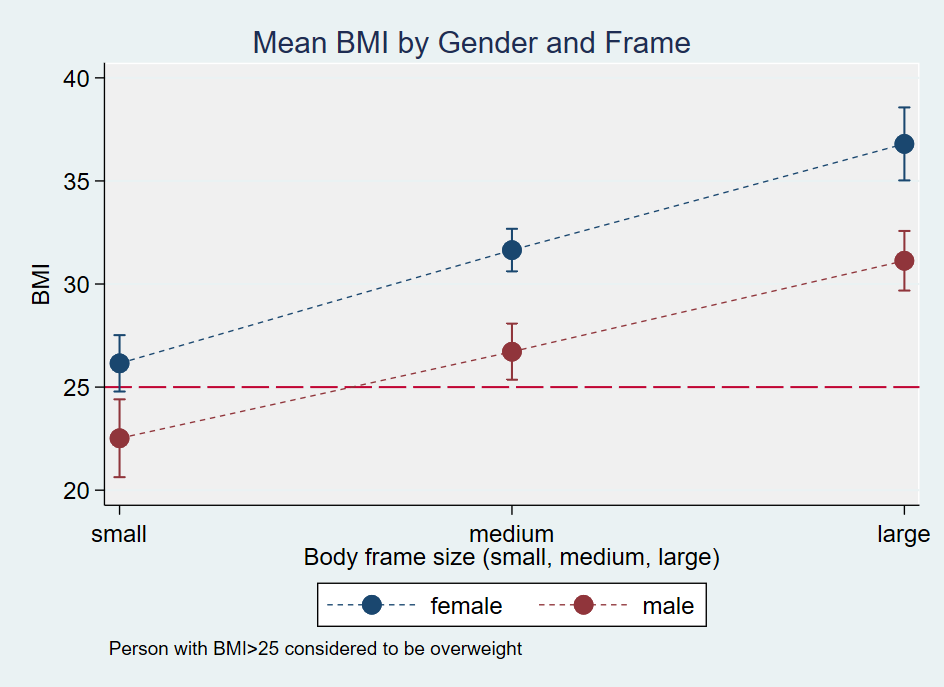 As a finale, I would then address the question the dieticians all had.  Are there differences among the six groups? I answer that question by running a pairwise comparison.

I can now easily explain to them that there is a statistical difference between every combination of sex and gender with regards to mean BMI except for two situations.

You know and can report that these contrasts are not significantly different from each other because that is what the interaction terms in your original regression model measured. You can have that information ready for any members of the audience who are interested in that specific test and who will understand the output.  (Appendices are a great place for this).

No one is left scratching their head.

While this example showed a linear model, this exact approach is especially useful for understanding the effects of categorical variables with interactions in generalized linear models. In that situation, though, you have to make sure you’re not using p-values on marginal means that have been back-transformed.