We’ve looked at the interaction effect between two categorical variables. Now let’s make things a little more interesting, shall we?

What if our predictors of interest, say, are a categorical and a continuous variable? How do we interpret the interaction between the two?

Well, you’re in luck. Read on.

We’ll keep working with our trusty 2014 General Social Survey data set. But this time let’s examine the impact of job prestige level (a continuous variable) and gender (a categorical, dummy coded variable) as our two predictors. Here, gender is called “male” and is coded 1 for males and 0 for females.

We can see that, on average, men make approximately $16,285 more than women.

What we want to know is, does the gender difference in income differ based on the job prestige level? An interaction term will tell us.

So you’re probably wondering, how do we interpret these coefficients?

But this gender gap of $15,716 isn’t the same for every prestige level of job. The interaction is statistically significant at a level of 0.0001.

In other words, the increase in salary for having a higher prestige job differs for men and women.

Another way to say the same thing is that the difference in salary between men and women widens as job prestige score increases. 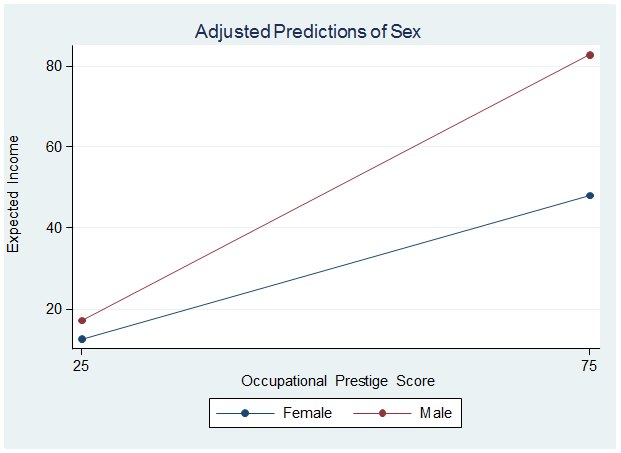 So if someone tells you that men make X amount more than women, keep in mind that the difference in income depends (in part) upon the caliber of the job. The more prestigious the job, the greater the gap, as the graph shows.

Moral of the story: When there is a statistically significant interaction between a categorical and continuous variable, the rate of increase (or the slope) for each group within the categorical variable is different.