I recently received this great question:

Hi Karen,  ive purchased a lot of your material and read a lot of your pdf documents w.r.t. regression and interaction terms.  Its, now, my general understanding that interaction for two or more categorical variables is best done with effects coding, and interactions  cont v. categorical variables is usually handled via dummy coding.  Further, i may mess this up a little but hopefully you’ll get my point and more importantly my question, i understand that

Any help would be greatly appreciated,

Great question.  First, yes, everything you state in points 1 and 2 are correct. I would add, though, that the effect-coded coefficients are not all that easy to interpret by themselves.  They do give you p-values for true main effects, and that’s useful, but you usually need to interpret using multiple comparison tests of the means.

To answer your questions:

It all comes down to what is a 0 point in dummy and effect coding.

In dummy coding, we’ve set the value of 0 to one of the categories, so:

1. the coefficients reflect actual cell mean differences, and have meaningful interpretations as such

In effect coding, we’ve set the value of 0 to being in between the two categories, so:

1. the coefficients are differences between cell means and grand means, and do not have particularly meaningful interpretations.  So you can use the p-value to tell that there is a significant interaction, but the only way to interpret that interaction in a meaningful way is to actually look at the means.  That’s why we usually just look at F statistics and means in ANOVA, which uses effect coding.  The coefficients themselves aren’t very interpretable.

Below, I’ve inserted an example.  I’ve displayed the means of each group and the coefficients when the variables are dummy and effect coded.

In dummy coding, the intercept is one of the four means–when both Poverty and Gender=0.  The various coefficients are differences from that mean.  Grab a calculator and see if you can figure out how to get each mean.

In effect coding, the intercept is the grand mean.  That point right in the middle of the graph.  The coefficients are differences from that point to the points marked with X on the graph.  Once again, see if you can figure out what each coefficient is telling you. 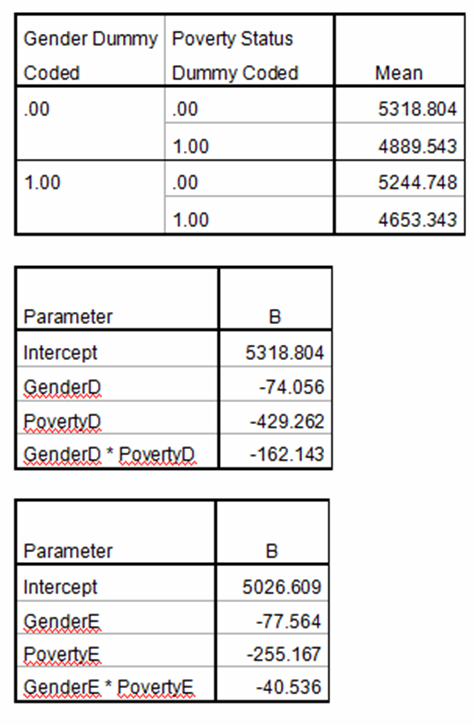 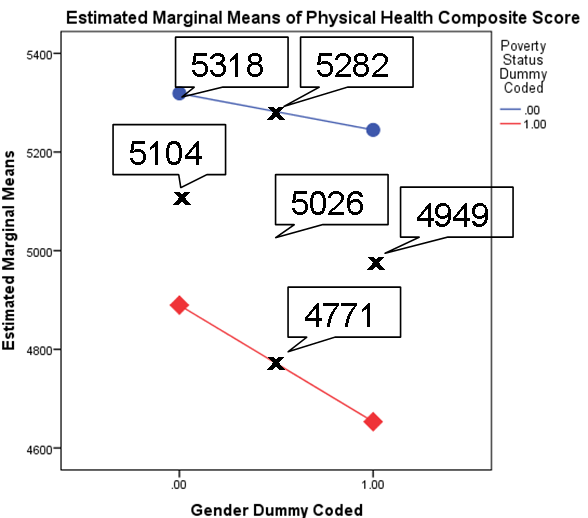