The example from Interpreting Regression Coefficients was a model of the height of a shrub (Height) based on the amount of bacteria in the soil (Bacteria) and whether the shrub is located in partial or full sun (Sun). Height is measured in cm, Bacteria is measured in thousand per ml of soil, and Sun = 0 if the plant is in partial sun, and Sun = 1 if the plant is in full sun.

The regression equation was estimated as follows: 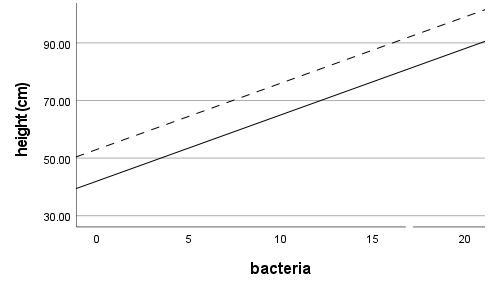 How adding an interaction changes the model

It would be useful to add an interaction term to the model if we wanted to test the hypothesis that the relationship between the amount of bacteria in the soil on the height of the shrub was different in full sun than in partial sun.

Another  is that plants with more bacteria in the soil tend to be taller in both full and partial sun. But the relationship is much more dramatic in full than in partial sun. 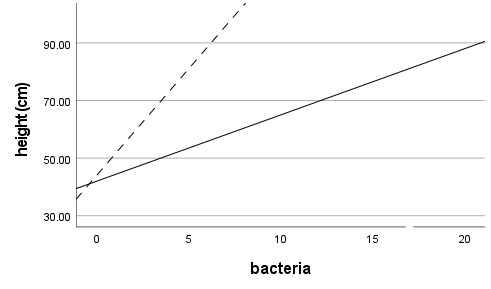 In our example, once we add the interaction term, our model looks like:

Because of the interaction, the effect of having more bacteria in the soil is different if a plant is in full or partial sun. Another way of saying this is that the slopes of the regression lines between height and bacteria count are different for the different categories of sun. B3 indicates how different those slopes are.

Interpreting B2 is more difficult. B2 is the effect of Sun when Bacteria = 0. Since Bacteria is a continuous variable, it is unlikely that it equals 0 often, if ever. So B2 can be virtually meaningless by itself.