Some types of logistic regression can be run in more than one procedure.  For some unknown reason, some procedures produce output others don’t.  So it’s helpful to be able to use more than one. 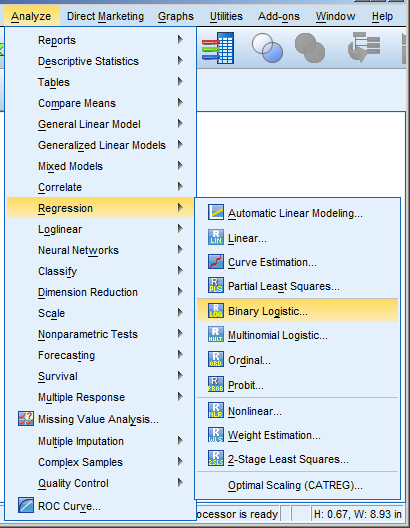 Logistic Regression can be used only for binary dependent variables.  Invoke it using the menu choices at right or through the LOGISTIC REGRESSION syntax command.

The dependent variable must have only two values.  If you specify a variable with more than two, you’ll get an error.

One big advantage of this procedure is it allows you to build successive models by entering a group of predictors at a time.

So for example, using this syntax, I’m actually simultaneously running two models, one with only two independent variables, (cleverly) named Factor and Covariate1.

This is called “Hierarchical Regression” (not to be confused with Hierarchical Linear Models or HLM). It allows an easy comparison of how model fit and coefficients change as you add predictors.

The Logistic Regression command is invoked through the  menus under Regression–>Binary Logistic, as seen above.  (But don’t forget to Paste your syntax, so you have a record of what you did)!

PLUM stands for Polytomous Universal Model.  That’s a mouthful, but just comes down to models for categorical outcomes with more than two ordered categories.

If your outcome categories are not ordered, don’t use PLUM.  You cannot tell it that categories have no order, and it will put them into a logical order. 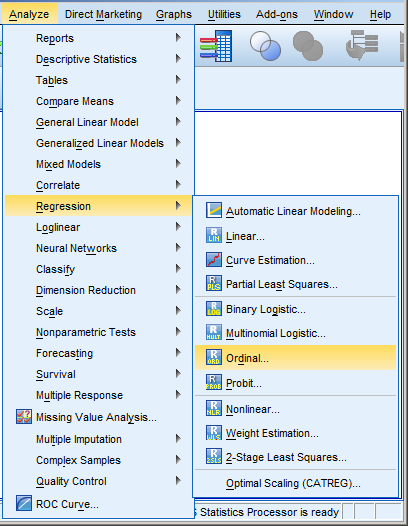 Logistic regression models in PLUM are proportional odds models.  That means a few things. First,  it models the odds for each ordered category compared to all lower-ordered categories. Second, the odds ratio for each predictor is the same, regardless of whether you’re comparing category 4 to 3 and below or category 3 to 2 and below.

PLUM has a nice option to check whether this assumption is reasonable.  In many data sets it isn’t, so always check it.

PLUM is invoked through the  menus under Regression–>Ordinal, as seen above.

Unlike binary and ordered models, multinomial models cannot also be run in GenLin (see below). 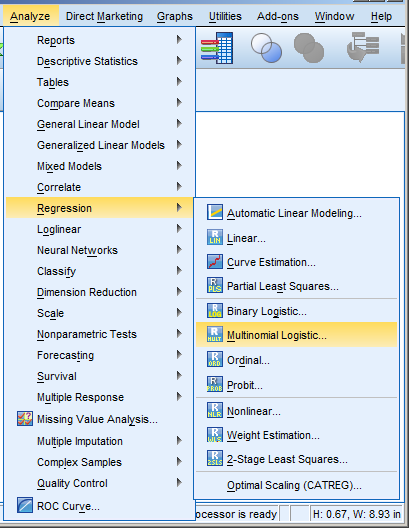 Multinomial logistic regression models simultaneously run a series of binary models. Each one compares the odds of one outcome category to a reference category.

One nice feature in NomReg is you can specify any one of the outcome categories as the reference. Just use the BASE= option (or clicking the “Reference Category” button in the menus).

This can save you a lot of time creating dummy variables for categorical predictors.

As mentioned above, logistic regression models are one type of generalized linear model. 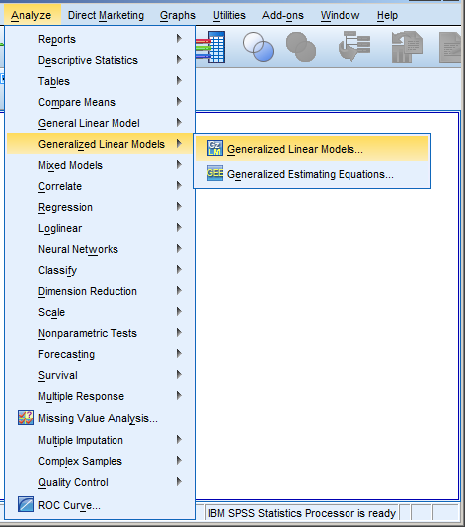 This means that you can use the GenLin procedure to run binary and ordinal logistic regression models.  It doesn’t however, run unordered multinomial models.

GenLin can run many more models that just logistic.  So it requires that you specify the outcome distribution as either binomial or multinomial (for which it will run an ordinal model) and a logit link function.

If you could use Logistic or PLUM, why would you ever use GenLin?

GenLin has a few advantages in certain situations.  Here are three that I commonly use.

2. GenLin prints EMMeans in both the original scale (ie. probabilities) and the transformed scale (log-odds).