Relative Risk and Odds Ratios are often confused despite being unique concepts.  Why?

Well, both measure association between a binary outcome variable and a continuous or binary predictor variable.

And unfortunately, some people use the names interchangeably.  They shouldn’t be because they have different interpretations. So it’s important to keep them separate and to be precise in the language you use.

Suppose you have a school that wants to test out a new tutoring program.  At the start of the school year they impose the new tutoring program (treatment) for a group of students randomly selected from those who are failing at least 1 subject at the end of the 1st quarter.  The remaining students receive the customary academic support (control group).

At the end of the school year the number of students in each group who fail any of their classes is measured. Failing a class is considered the outcome event we’re interested in measuring. From these data we can construct a table that describes the frequency of two possible outcomes for each of the two groups. 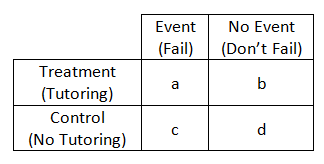 Although each of these probabilities (i.e., risks) is itself a ratio, this isn’t the risk ratio.  To measure the effect of the tutoring, compare the risk of failing in the tutored students to the risk in the untutored students.

The ratio of these two probabilities R1/R2 is the relative risk or risk ratio. Pretty intuitive.

A relative risk of 1 says the tutoring made no difference at all.  If it’s above 1, then the tutored group actually had a higher risk of failing than the controls.

So for example, in the Treatment group, the odds of an event is the number of tutored students who failed a class/the number of students in the tutored group who passed all their classes.

The numerator is the same as that of a probability, but the denominator here is different.  It’s not a measure of events out of all possible events.  It’s a ratio of events to non-events.  You can switch back and forth between probability and odds—both give you the same information, just on different scales.

So as you can see, which both relative risk and odds ratios tell you about the change in how likely an outcome is at different values of a predictor, they do it slightly differently.