In my last article, Hierarchical Regression in Stata: An Easy Method to Compare Model Results, I presented the following table which examined the impact several predictors have on one’ mental health. 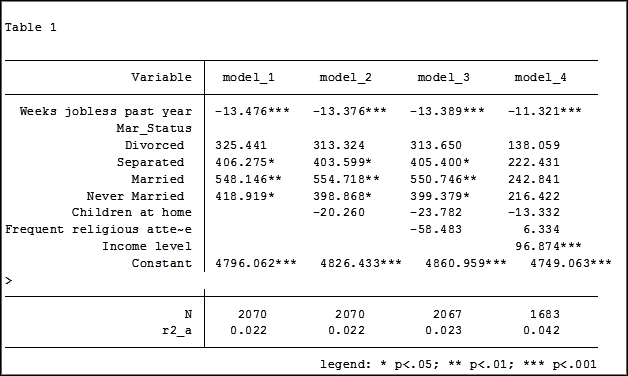 At the bottom of the table is the number of observations (N) contained within each sample.

The sample sizes are quite large. Does it really matter that they are different? The answer is absolutely yes.

Fortunately in Stata it is not a difficult process to use the same sample for all four models shown above.

As I have mentioned previously, Stata stores results in temp files. You don’t have to do anything to cause Stata to store these results, but if you’d like to use them, you need to know what they’re called.

To see what is stored after an estimation command, use the following code:
ereturn list

Remember that the “stored” results are in temp files.  They will disappear the next time you run another estimation command.

So how do I use the same sample for all my models? Follow these steps.

Using the regression example on mental health I determine which model has the fewest observations.  In this case it was model four.

Now I will re-run my four regressions and include only the observations that were used in model 4. I will store the models using different names so that I can compare them to the original models.

My commands to run the models are:

Here are the results comparing the original models (eg. Model_1) versus the models using the same sample (eg. Model_1a): 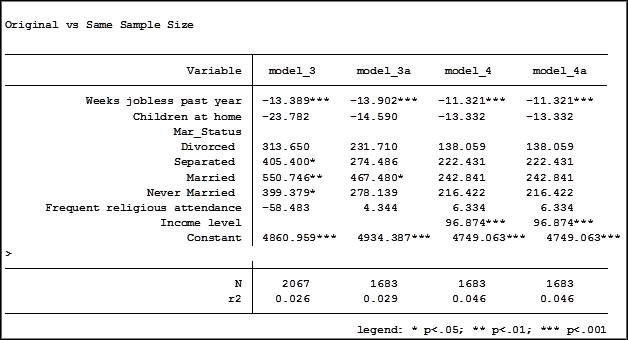 Comparing the original models 3 and 4 one would have assumed that the predictor variable “Income level” significantly impacted the coefficient of “Frequent religious attendance”. Its coefficient changed from -58.48 in model 3 to 6.33 in model 4.

That would have been the wrong assumption. That change is coefficient was not so much about any effect of the variable itself, but about the way it causes the sample to change via listwise deletion.  Using the same sample, the change in the coefficient between the two models is very small, moving from 4 to 6.