As mentioned in a previous post, there is a significant difference between truncated and censored data.

Truncated data eliminates observations from an analysis based on a maximum and/or minimum value for a variable.

Censored data has limits on the maximum and/or minimum value for a variable but includes all observations in the analysis.

As a result, the models for analysis of these data are different. END_OF_DOCUMENT_TOKEN_TO_BE_REPLACED

What statistical model would you use for longitudinal data to analyze between-subject differences with within-subject change?

Most analysts would respond, “a mixed model,” but have you ever heard of latent growth curves? How about latent trajectories, latent curves, growth curves, or time paths, which are other names for the same approach?

END_OF_DOCUMENT_TOKEN_TO_BE_REPLACED 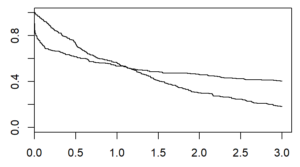 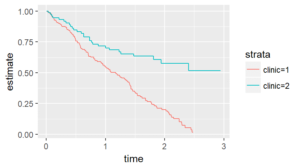 Often a model is not a simple process from a treatment or intervention to the outcome. In essence, the value of X does not always directly predict the value of Y.

END_OF_DOCUMENT_TOKEN_TO_BE_REPLACED

In a previous post , Using the Same Sample for Different Models in Stata, we examined how to use the same sample when comparing regression models. Using different samples in our models could lead to erroneous conclusions when interpreting results.

But excluding observations can also result in inaccurate results.

Survival data models provide interpretation of data representing the time until an event occurs. In many situations, the event is death, but it can also represent the time to other bad events such as

cancer relapse or failure of a medical device. It can also be used to denote time to positive events such as pregnancy. Often patients are lost to follow-up prior to death, but you can still use the information about them while they were in your study to better estimate the survival probability over time.

This is done using the Kaplan-Meier curve, an approach developed by END_OF_DOCUMENT_TOKEN_TO_BE_REPLACED