In a previous post , Using the Same Sample for Different Models in Stata, we examined how to use the same sample when comparing regression models. Using different samples in our models could lead to erroneous conclusions when interpreting results.

But excluding observations can also result in inaccurate results.

When we controlled for income we noticed that our sample size decreased from 2,067 to 1,683. Using the same 1,683 observations in model 3a that we used in model 4 had a significant impact on the coefficient of the religious attendance variable for model 3.

Note: regression analysis in Stata drops all observations that have a missing value for any one of the variables used in the model. (This is knows as listwise deletion or complete case analysis).

So a person who does not report their income level is included in model_3 but not in model_4. 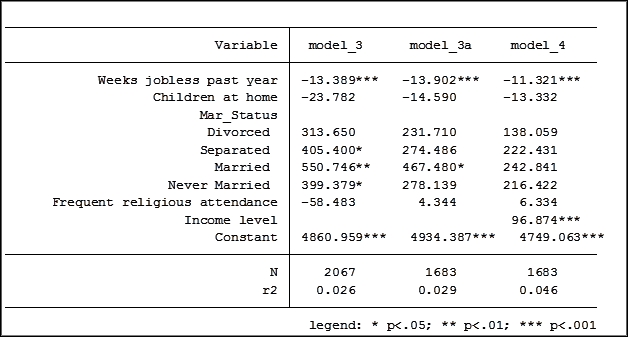 To examine the differences between the two samples I ran model 3 once more and generated a new variable “in_model_3”.
gen in_model_3=e(sample) 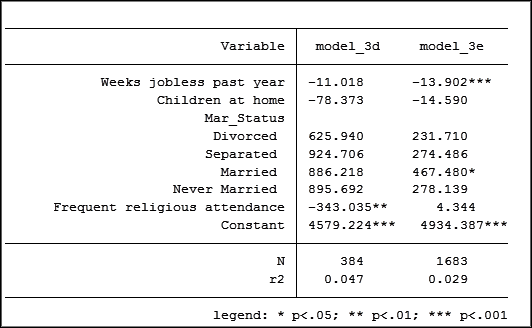 Let’s check out the summary table for MCS subdivided by whether the observation is in model 4 (not_in_model4).

Something that looks odd is the “minimum” value of negative 2. It’s not possible for the mental composite score to be negative.

These observations need to be treated as missing data.

The two groups are now more similar. A two group t-test confirms there is not a significant difference between the means of the two groups. 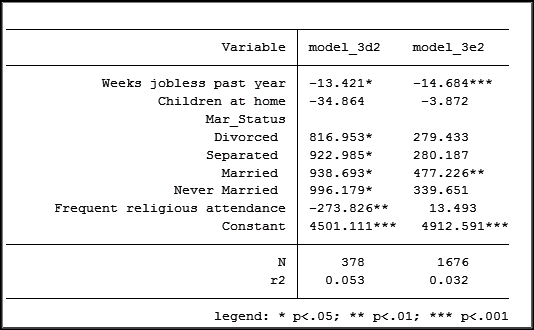 The difference between the coefficients for religious attendance is still significantly different. But it has decreased from 347 to 286 as a result of eliminating the 13 observations with a value of -2.

What else might be influencing the difference in coefficients? Does the manner in which frequent religious attendance is defined (3 or more times per month) affect the outcome?

Survey researchers generally agree that people with low income are less likely to answer a survey question regarding their income level.  Is that impacting the results?

Is there another variable that we are not controlling for that is affecting the results?