You put a lot of work into preparing and cleaning your data. Running the model is the moment of excitement.

You look at your tables and interpret the results. But first you remember that one or more variables had a few outliers. Did these outliers impact your results?

One widely-used post-estimation command for linear regression is predict. Predict is very important for detecting outliers and determining their impact on your model.

There are 17 options for using this command. Why so many? One reason is no one measure can tell you everything you need to know about your outliers. Some options are useful for identifying outcome outliers while others identify predictor outliers.

Studentized residuals are a way to find outliers on the outcome variable.  Values far from 0 and the rest of the residuals indicate outliers on Y.

Leverage is a measurement of outliers on predictor variables. It measures the distance between a case’s X value and the mean of X. Like the residuals, values far from 0 and the rest of the residuals indicate outliers on X.

Cook’s distance is a measure of influence–how much each observation affects the predicted values. It incorporates both outcome (residuals) and predictor (leverage) observations in its calculations, but more importantly tells you how much a case affects the model. 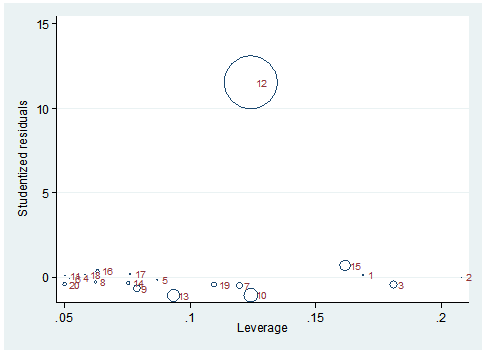 Another method for determining the influence an observation has on the model’s coefficients is to run a series of regressions where you emit one observation each time. If your data set has 20 observations you would end up with 20 regression outputs. Using macros and a loop, this process was run on the 20 observations. The slope and y-intercept of each regression were saved in the data set. Those values are graphed below along with the observation’s identifier. 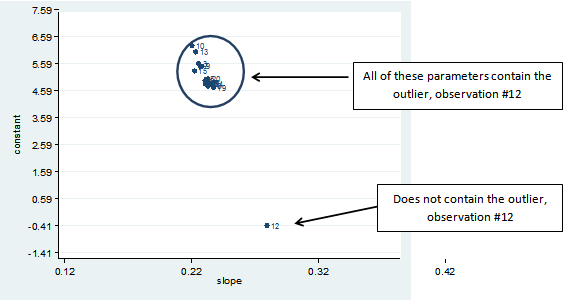