Multicollinearity is one of those terms in statistics that is often defined in one of two ways:

1. Very mathematical terms that make no sense — I mean, what is a linear combination anyway?

So what is it really? In English?

Well, ultimately multicollinearity is a situation where multiple predictors in a regression model are overlapping in what they measure.  In other words, each variable doesn’t give you entirely new information.

This makes it hard for the regression model to estimate the effect of any given predictor on the response. If the predictors overlap, how can you tell which one is really associated with the response? Or if they both are related to the response, how do you measure each of those individual relationships?

To really picture what multicollinearity is, let’s start by picturing what it is not. 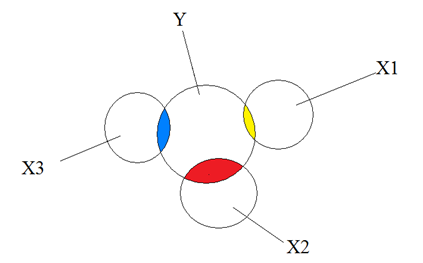 In this diagram, we have a model with three predictors—X1, X2, and X3—and one response variable, Y.

The colored sections are where each X explains some of the variance in Y.

As you can see, the Xs don’t overlap at all—each is distinctly measured. If you checked correlations, each X would have a mild correlation with Y, but the Xs would not correlate at all with each other.  In other words, each one measures unique information. Knowing the value of one X variable tells you nothing about the value of another.

Some people will tell you that this complete independence among the Xs is an assumption of regression, but it’s not. It’s pretty rare to ever have a data set where every predictor that is related to Y is not related to each other.

It does, however, affect the way you interpret your coefficients. If you want to interpret each X’s coefficient as the independent effect of that X on Y, then yes, you’re making an assumption that all Xs are independent.

But more common is to have a moderate overlap. The overlap can become so extreme that the model becomes unstable. Let’s look at both situations.

On the left is the situation where there is mild overlap among the predictors. We can still measure the unique effect of each predictor on Y—those are the yellow, red, and blue sections.

The regression coefficients do not include the orange and purple sections. This means the coefficients themselves are not telling you the full picture of the effect of each predictor on Y.

As long as you keep that in mind as you interpret coefficients, you’re not violating assumptions and your model is reliable. But you can’t tell if that orange section is really attributable to X1 or X2. Or if that distinction even has any meaning. There is no way to distinguish them.

But in the situation on the right, the overlap between X1 and X2 becomes so extreme that it can cause the model to have estimation problems. This is usually what we mean when we say we have multicollinearity.

The model is trying to estimate the unique effect of each predictor on Y, but there just isn’t enough unique information about X1 and X2 to calculate it.

If when X1 goes up, so does X2, how can you separately estimate the effect of a one unit increase of X1 on Y and X2 on Y?

There are so many possible reasonable estimates for the unique effect of X1 on Y that even though the coefficient is unbiased, it will have a huge standard error.  This is variance inflation.