But unlike SAS and SPSS users, Stata users benefit from the contributions made by really, really smart people. How so? Is Stata an “open source” software package?

Technically a commercial software package (software you have to pay for) cannot be open source. Based on that definition Stata, SPSS and SAS are not open source. R is open source.

But, because I have a Stata license (once you have it, it never expires) I think of Stata as being open source. This is because Stata allows members of the Stata community to share their expertise.

There are countless commands written by very, very smart non-Stata employees that are available to all Stata users.

Practically all of these commands, which are free, can be downloaded from the SSC (Statistical Software Components) archive. The SSC archive is maintained by the Boston College Department of Economics. The website is: https://ideas.repec.org/s/boc/bocode.html

There are over three thousand commands available for downloading. Below I have highlighted three of the 185 that I have downloaded.

1. coefplot is a command written by Ben Jann of the Institute of Sociology, University of Bern, Bern, Switzerland. This command allows you to plot results from estimation commands.

Using the coefplot command I can graphically compare the coefficients and confidence intervals for each independent variable used in the models.

The code and graph are:

Including the code xline(0) creates a vertical line at zero which quickly allows me to determine whether a confidence interval spans both positive and negative territory. 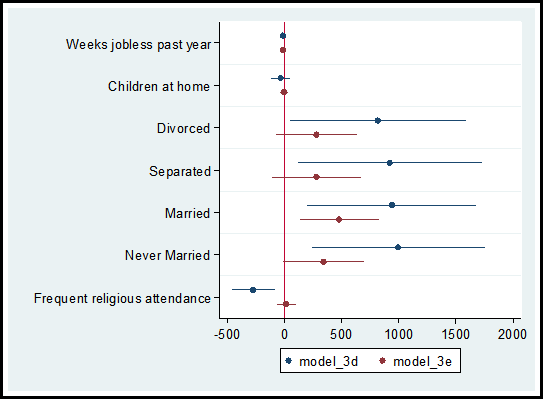 I can also separate the predictor variables into individual graphs: 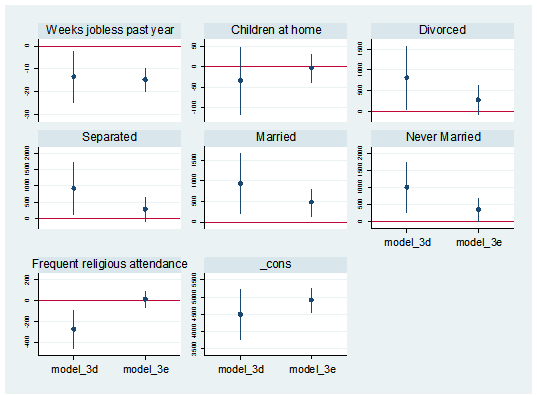 2. Nicholas Cox of Durham University and Gary Longton of the Fred Hutchinson Cancer Research Center created the command distinct. This command generates a table with the count of distinct observations for each variable in the data set.

When getting to know a data set, it can be helpful to search for potential indicator, categorical and continuous variables. The distinct command along with its min(#) and max(#) options allows an easy search for variables that fit into these categories.

For example, to create a table of all variables with three to seven distinct observations I use the following code:
distinct, min(3) max(7)

In addition, the command generates the scalar r(ndistinct). In the workshop Managing Data and Optimizing Output in Stata, we used this scalar within a loop to create macros for continuous, categorical and indicator variables.

3. In a data set it is not uncommon to have outliers. There are primarily three options for dealing with outliers. We can keep them as they are, winsorize the observations (change their values), or delete them. Note, winsorizing and deleting observations can introduce statistical bias.

The user has the option to change the values to the percentile of their choice.
winsor2 salary, cuts(0.5 99.5) (makes changes at the 0.5st and 99.5th percentile)

To add these three commands to your Stata software execute the following code and click on the links to download the commands:

As shown in the December, 2015 free webinar “Stata’s Bountiful Help Resources”, you can also explore all the add-on commands via Stata’s “Help” menu. Go to “Help” => “SJ and User Written Commands” to explore.

Getting Started with Stata
Jeff introduces you to the consistent structure that Stata uses to run every type of statistical analysis.