One approach to model building is to use all predictors that make theoretical sense in the first model. For example, a first model for determining birth weight could include mother’s age, education, marital status, race, weight gain during pregnancy and gestation period.

The main effects of this model show that a mother’s education level and marital status are insignificant. 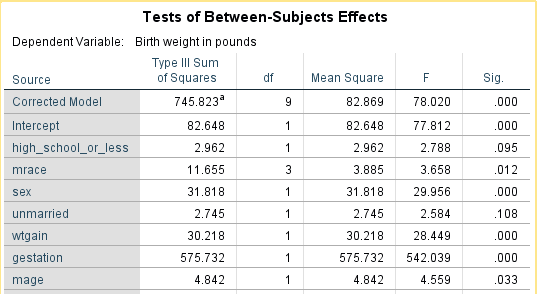 Dropping marital status and running a new model we find that the mother’s education is now significant. We also see an improvement in the significance of the mother’s age from p=0.033 to p=0.004.

What if mother’s education level was dropped instead of marital status? 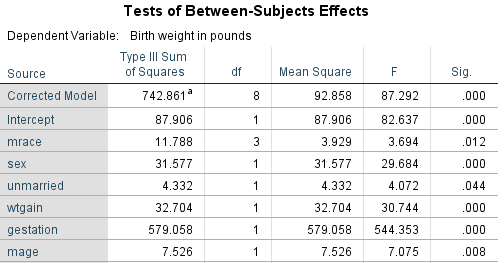 Marital status is now significant. Mother’s age has a lower p-value as well when compared to the model using both education and marital status. Why is there a conflict between the three models? Why the improvement with the statistical significance of mother’s age?

The mean age for the two predictors is almost identical as well.

Does theory suggest these relationships exist? If they run counter to theory the researcher should explain the conflicts found within the data.

Running a series of descriptive statistics before running models can help identify issues such as these shown here. Otherwise, we might reach inaccurate conclusions due to an unusual sample.