Kappa is used when two raters both apply a criterion based on a tool to assess whether or not some condition occurs. Examples include:

If the two-raters can reliably use the criterion to make the same assessment on the same targets, then their agreement will be very high and provide evidence we have reliable ratings. If they can’t, then either the criterion tool isn’t useful or the raters are not well enough trained.

Why not percent agreement

Here is a classic example: Two raters rating subjects on a diagnosis of Diabetes.

This table would result in a Kappa of .51 (I won’t go into the formulas).

How High of a Kappa is good Inter-Rater Reliability?

But how do you know if you have a high level of agreement?

An often-heard Rule of Thumb for the Kappa statistic is:

Where did this originate? Cohen suggested the Kappa statistic be interpreted as:

The emphasis is on SUGGESTED.
Other authors have proposed several benchmarks:

It’s very similar to correlation coefficients. There isn’t a clear cut off for what you consider strong, moderate, or weak.

Why can’t we use these rules of thumb as clear cut offs? As with everything in statistics, your decision making depends on the study and the purpose.

For some studies .6 might be acceptable agreement. If you’re looking at physician’s agreement on who should have invasive surgery you pretty much want near-perfect agreement. So these are just general guidelines and it is necessary to consider the goal of the study and the consequences of inaccuracy.

One more thing to note. Most of the time, Kappa works great to measure agreement. However, there is an interesting situation where percent agreement is very high, but the Kappa statistic is very low. We call this the Kappa paradox. 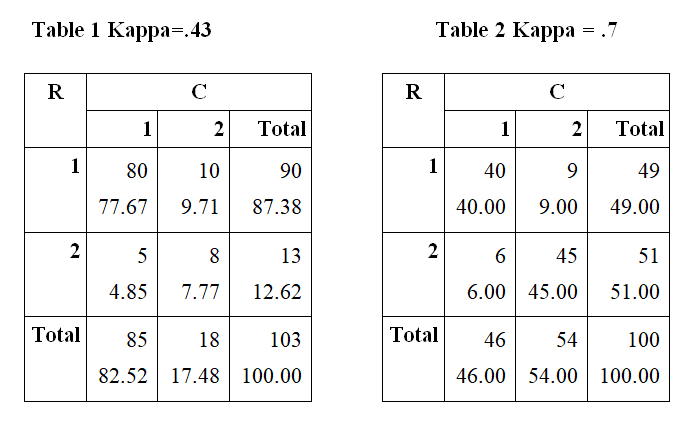 This can happen when nearly everyone or nearly no one is assessed as having the condition. . This affects the marginal totals in the calculation of chance agreement. The percent agreement in both table 1 and table 2 is 85%. However, the Kappa for Table 1 is much lower than for Table 2 because almost all of the agreements are Yeses and there are relatively few nos. I’ve seen situations where a researcher had almost perfect agreement and the Kappa was .31! This is the Kappa paradox.

What have we learned about Kappa? The Kappa statistic is a measure of inter-rater reliability. There is no absolute value for good agreement and depends on the nature of the study. Be aware that in some circumstances it is possible to have great agreement, but a low Kappa.

(*Cohen was a busy guy, he did lots of stuff)