Creating a quality scale for a latent construct (a variable that cannot be directly measured with one variable) takes many steps. Structural Equation Modeling is set up well for this task.

One important step in creating scales is making sure the scale measures the latent construct equally well and the same way for different groups of individuals.

Multiple group analysis allows us to compare loadings, intercepts and error terms in the groups’ measurement models. To have strong invariance, we need to show equal loadings of variables onto the latent variable and equal intercepts between groups. Conceptually, the comparison between groups is shown below.

How can we determine the construct is measured consistently across groups?

There is a multi-step process .The required steps are in this order:

Rerun the Exploratory Factor Analysis (EFA) model separately for both groups.
If different indicator variables load onto the constructs across groups, we go no further. The construct is inconsistent across groups. This is known as testing for dimensional invariance.

After Step 1, we’ve established that for both groups, we use the same indicator variables to measure the construct. Next we establish that their loadings and intercepts are similar.

Run a single model in which the two groups each have their own measurement model. The indicators will be the same for each group, but you allow the software to estimate the loadings and intercepts uniquely for each group.
The loadings and intercepts will rarely be the same for both groups. But the question is, are they similar enough to be considered statistically the same?

In the table below are the estimated loadings and intercepts for the male and female measurement models. This is called the configural model:

They’re not identical, but are they close enough?

Now refit the model with the two groups. But this time, force the factor loadings to be equal across groups. Allow the intercepts to be unequal. This model is called the metric model.

The configural model will have n estimated parameters more than the metric model where n is the number of indicators in the latent construct. The models are considered nested because one model has additional parameters.

If the chi-square difference between the configural and metric models is insignificant we then move on to step 3.

Fit the model with the factor loadings and intercepts equal across all groups. This is known as the scalar model.

If we have group invariance, we know the construct is being measured the same across groups. We can then compare the differences between groups in a path analysis.

Group invariance is shown graphically below. The graph focuses on only one indicator, Y1. This relationship must hold true for all indicators in order to have group invariance. This is the same graph used to show measurement invariance for the MIMIC model.

The diagonal line is the relationship between Y1 and n1. This relationship is expressed as the factor loading (the slope). As Y1 increases, the score of the latent construct increases.
When the slope and the intercept are consistent for all matching indicators across groups, we have group invariance. 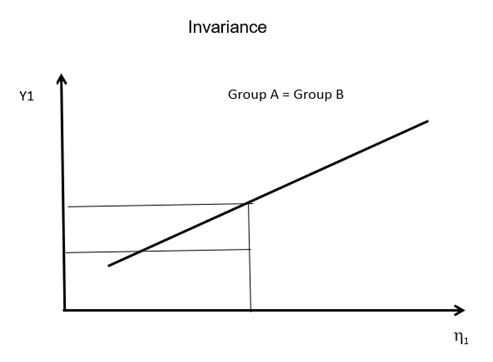 If the slopes and intercepts are not consistent, as shown below, we have group non-invariance. 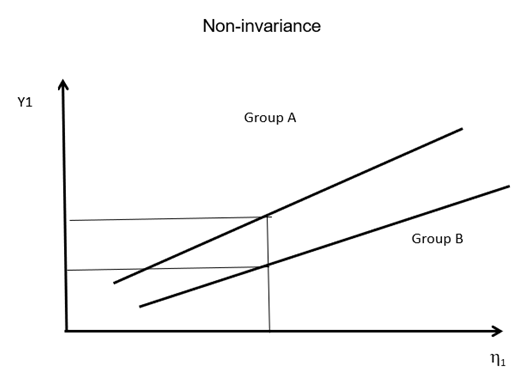 In these situations, we cannot compare the construct between groups.