If you have count data you use a Poisson model for the analysis, right?

Let’s see how we can do this with some real data. A survey was done in Australia during the peak of the flu season. The outcome variable is the total number of times people asked for medical advice from any source over a two-week period.

We are trying to determine what influences people with flu symptoms to seek medical advice. The mean number of times was 0.516 times and the variance 1.79.

The mean does not equal the variance even after accounting for the model’s predictors.

Here are the results for this model:

A number of excellent text books provide methods of eliminating or reducing the overdispersion of the data. One of the methods is known as “scaling the standard errors”.  The model weight is replaced with “the inverse square root of the dispersion statistic”.

Back in the good old days before computers you had to do all this by hand. Today most statistical software packages will do this for you. You just have to write the syntax correctly. Here are the results when we adjust the standard errors by the dispersion statistic.

Notice that the coefficients are identical but the standard errors are larger for the scaled version, which is what we want.

But does correcting for our overdispersion in this manner mean that we should use the scaled Poisson model?

There are other methods we could choose from: “quasi-likelihood” model, sandwich or robust variance estimators or bootstrapped standard errors.

Seldom would all methods generate the same results.

My suggestion: rather than use an ad-hoc method to make a model work that doesn’t quite fit, use the count model that best fits the data.

Graphing can be an excellent way to see how a model fits the data.  Phil Ender at UCLA created a third party add-on for Stata users called nbvargr. Joseph Hilbe in his book “Modeling Count Data” provides the code (syntax) to generate similar graphs in Stata, R and SAS. 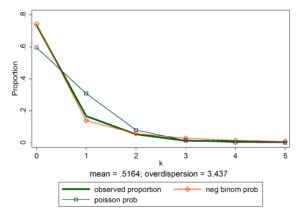 Here is the output using a negative binomial model.

Please note that there are a few quantitative methods for determine the best model for the data as well. These should be used as well when determining which model fits the data best.