An important feature of factor analysis is that the axes of the factors can be rotated within the multidimensional variable space. What does that mean?

The program looks first for the strongest correlations between variables and the latent factor, and makes that Factor 1. Visually, one can think of it as an axis (Axis 1).

The factor analysis program then looks for the second set of correlations and calls it Factor 2, and so on.

In order to make the location of the axes fit the actual data points better, the program can rotate the axes. Ideally, the rotation will make the factors more easily interpretable.

Here is a visual of what happens during a rotation when you only have two dimensions (x- and y-axis): 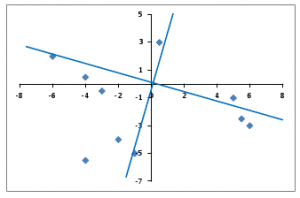 The original x- and y-axes are in black. During the rotation, the axes move to a position that encompasses the actual data points better overall.

Programs offer many different types of rotations. An important difference between them is that they can create factors that are correlated or uncorrelated with each other.

Let’s imagine the orthogonal rotation did not work out as well as previously shown. Instead, we get this result:

Clearly, no variable is loading highly onto Factor 2. What happened?

Since our first attempt was an orthogonal rotation, we specified that Factor 1 and 2 are not correlated.

Consequently, the two axes of the two factors are probably closer together than an orthogonal rotation can make them. Here is a display of the oblique rotation of the axes for our new example, in which the factors are correlated with each other: 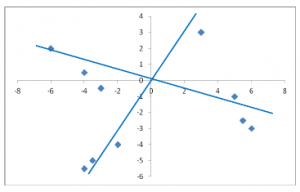 Clearly, the angle between the two factors is now smaller than 90 degrees, meaning the factors are now correlated. In this example, an oblique rotation accommodates the data better than an orthogonal rotation.