Today, I would like to briefly describe four misconceptions that I feel are commonly perceived by novice researchers in Exploratory Factor Analysis:

Misconception 1: The choice between component and common factor extraction procedures is not so important.

In Principal Component Analysis, a set of variables is transformed into a smaller set of linear composites known as components. This method of analysis is essentially a method for data reduction.

END_OF_DOCUMENT_TOKEN_TO_BE_REPLACED

I recently gave a free webinar on Principal Component Analysis. We had almost 300 researchers attend and didn’t get through all the questions. This is part of a series of answers to those questions.

If you missed it, you can get the webinar recording here.

Question: How do we decide whether to have rotated or unrotated factors?

Great question. Of course, the answer depends on your situation.

When you retain only one factor in a solution, then rotation is irrelevant. In fact, most software won’t even print out rotated coefficients and they’re pretty meaningless in that situation.

But if you retain two or more factors, you need to rotate.

Unrotated factors are pretty difficult to interpret in that situation. END_OF_DOCUMENT_TOKEN_TO_BE_REPLACED 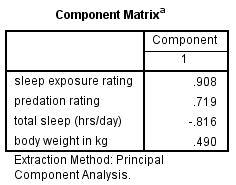 In other words, you may start with a 10-item scale meant to measure something like Anxiety, which is difficult to accurately measure with a single question.

You could use all 10 items as individual variables in an analysis–perhaps as predictors in a regression model.

But you’d end up with a mess.

Not only would you have trouble interpreting all those coefficients, but you’re likely to have multicollinearity problems.

And most importantly, you’re not interested in the effect of each of those individual 10 items on your END_OF_DOCUMENT_TOKEN_TO_BE_REPLACED