There are many statistical concepts that are easy to confuse.

Sometimes the problem is the terminology. We have a whole series of articles on Confusing Statistical Terms.

But in these cases, it’s the concepts themselves. Similar, but distinct concepts that are easy to confuse.

Some of these are quite high-level, and others are fundamental. For each article, I’ve noted the Stage of Statistical Skill at which you’d encounter it.

So in this series of articles, I hope to disentangle some of those similar, but distinct concepts in an intuitive way.

Are there concepts you get mixed up? Please leave it in the comments and I’ll add to my list.

What does it mean for two variables to be correlated?

Is that the same or different than if they’re associated or related?

This is the kind of question that can feel silly, but shouldn’t. It’s just a reflection of the confusing terminology used in statistics. In this case, the technical statistical term looks like, but is not exactly the same as, the way we mean it in everyday English. END_OF_DOCUMENT_TOKEN_TO_BE_REPLACED

They’re abstract, they’re a little weird, and there is not a common vocabulary or notation for them.

But they’re also extremely important to understand because many data sets require their use.

Repeated measures ANOVA has too many limitations. It just doesn’t cut it any more.

One of the most difficult parts of fitting mixed models is figuring out which random effects to include in a model. And that’s hard to do if you don’t really understand what a random effect is or how it differs from a fixed effect. END_OF_DOCUMENT_TOKEN_TO_BE_REPLACED

For example, Poisson regression (commonly used for outcomes that are counts) makes use of a natural log link function as follows:

END_OF_DOCUMENT_TOKEN_TO_BE_REPLACED

One question that seems to come up pretty often is:

What is the difference between logistic and probit regression?

Well, let’s start with how they’re the same:

Both are types of generalized linear models. This means they have this form:

END_OF_DOCUMENT_TOKEN_TO_BE_REPLACED

One of the many confusing issues in statistics is the confusion between Principal Component Analysis (PCA) and Factor Analysis (FA).

They are very similar in many ways, so it’s not hard to see why they’re so often confused. They appear to be different varieties of the same analysis rather than two different methods. Yet there is a fundamental difference between them that has huge effects on how to use them.

(Like donkeys and zebras. They seem to differ only by color until you try to ride one).

Both are data reduction techniques—they allow you to capture the variance in variables in a smaller set.

Both are usually run in stat software using the same procedure, and the output looks pretty much the same.

The steps you take to run them are the same—extraction, interpretation, rotation, choosing the number of factors or components.

Despite all these similarities, there is a fundamental difference between them: PCA is a linear combination of variables; Factor Analysis is a measurement model of a latent variable.

PCA’s approach to data reduction is to create one or more index variables from a larger set of measured variables. It does this using a linear combination (basically a weighted average) of a set of variables. The created index variables are called components.

The whole point of the PCA is to figure out how to do this in an optimal way: the optimal number of components, the optimal choice of measured variables for each component, and the optimal weights.

The picture below shows what a PCA is doing to combine 4 measured (Y) variables into a single component, C. You can see from the direction of the arrows that the Y variables contribute to the component variable. The weights allow this combination to emphasize some Y variables more than others. 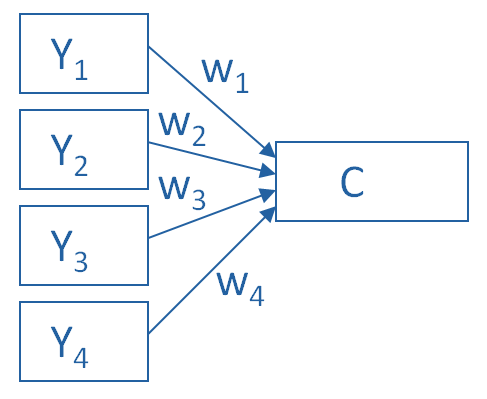 This model can be set up as a simple equation:

A Factor Analysis approaches data reduction in a fundamentally different way. It is a model of the measurement of a latent variable. This latent variable cannot be directly measured with a single variable (think: intelligence, social anxiety, soil health).  Instead, it is seen through the relationships it causes in a set of Y variables.

The measurement model for a simple, one-factor model looks like the diagram below. It’s counter intuitive, but F, the latent Factor, is causing the responses on the four measured Y variables. So the arrows go in the opposite direction from PCA. Just like in PCA, the relationships between F and each Y are weighted, and the factor analysis is figuring out the optimal weights.

In this model we have is a set of error terms. These are designated by the u’s. This is the variance in each Y that is unexplained by the factor.

You can literally interpret this model as a set of regression equations:

As you can probably guess, this fundamental difference has many, many implications. These are important to understand if you’re ever deciding which approach to use in a specific situation.