One of the most important concepts in data analysis is that the analysis needs to be appropriate for the scale of measurement of the variable. The focus of these decisions about scale tends to focus on levels of measurement: nominal, ordinal, interval, ratio.

These levels of measurement tell you about the amount of information in the variable. But there are other ways of distinguishing the scales that are also important and often overlooked.

This is important in statistics because we measure the probabilities differently for discrete and continuous distributions.

But the probabilities of many discrete random variables follow patterns that can be described with a mathematical function. This function is called a probability mass function (pmf).

Count data are a good example. A count variable is discrete because it consists of non-negative integers. Even so, there is not one specific probability distribution that fits all count data sets.

The Poisson distribution often fits count data. It fits well when the mean of the variable is equal to its variance. So how do you determine that?

You can also run a qqplot of your data against a Poisson distribution. Although we usually use these for normal distributions, you can do it with any of a number of distributions.

But many count variables fail these tests.

The negative binomial distribution contains an extra parameter that allows the variance to be greater than the mean. If you tried to fit a data set with that mean and variance to a Poisson distribution, it would be considered overdispersed — not a good fit.

Notice that there is a probability for each non-negative value on the x axis, beginning with zero. A Poisson or negative binomial random number generator will only create non-negative integers.

If the mean of a Poisson or negative binomial variable is high enough, it will be symmetric and bell-shaped. It will look like a normal distribution, except for one key distinction—normal variables are truly continuous, not discrete. They can take on any possible value.

As a result, there are an infinite number of values (2.30546 is a different value than 2.30547). It makes no sense to calculate the probability that X is any exact value in a continuous variable. That probability is infinitesimal, a value approaching zero.

With continuous variables, the probability of a value falling within a range is calculated instead. For example, there is a 95% probability that a value from a normal distribution will fall within 1.96 standard deviations of the mean of that distribution. 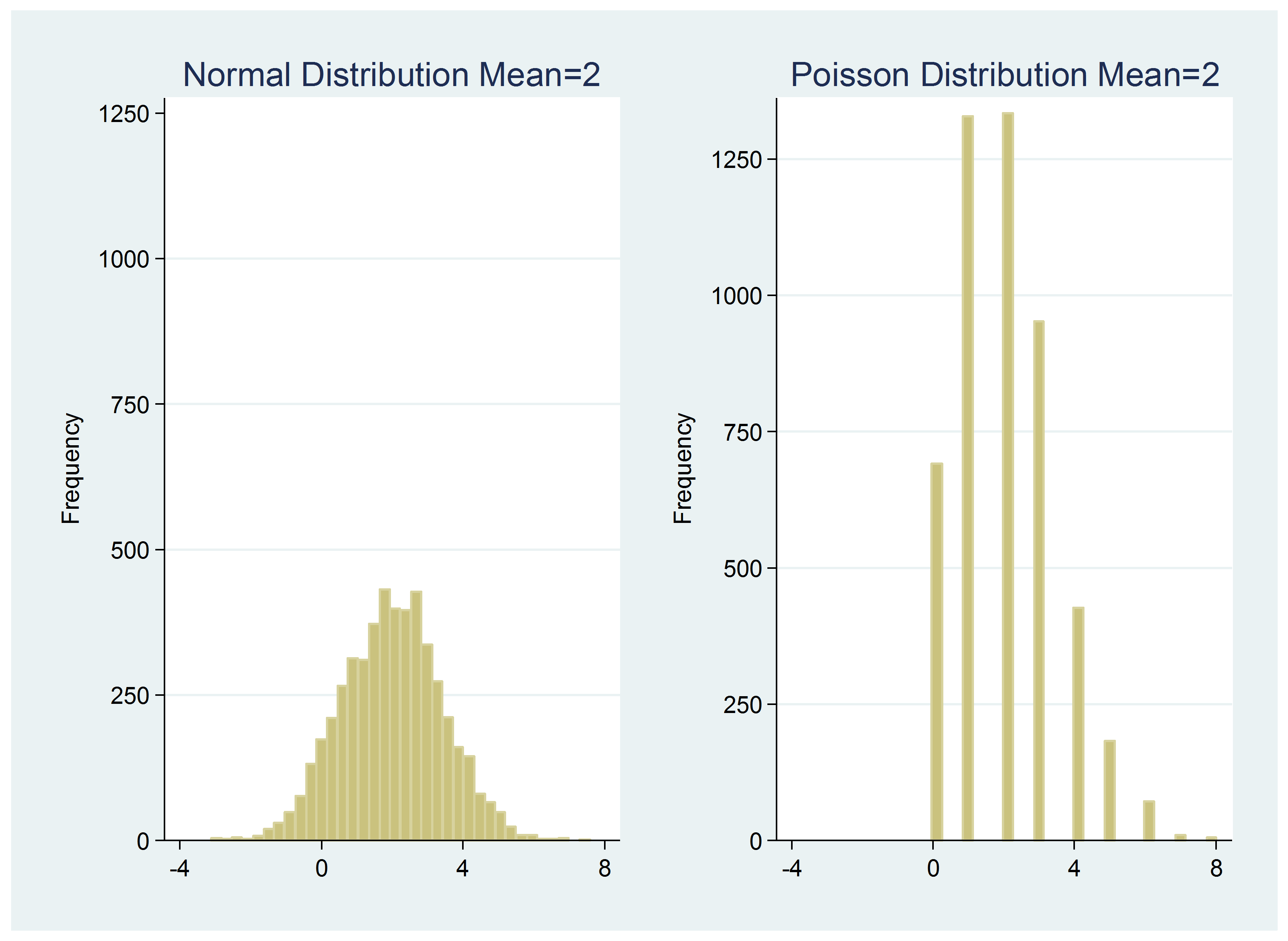 The ranges differ a lot (values are less than zero for the continuous variable).

There is a large difference in the number of unique observations (4,999 for the continuous set and 9 for the discrete Poisson set).

Examine your outcome variable to determine whether it is discrete or continuous. If it is discrete, find the probability distribution function that best matches its make-up.