In my last blog post we fitted a generalized linear model to count data using a Poisson error structure.

We found, however, that there was over-dispersion in the data – the variance was larger than the mean in our dependent variable.

Now let’s fit a quasi-Poisson model to the same data.

The outcome of our attempt to account for over-dispersion is that the residual deviance has not changed.

The dispersion parameter, which was forced to be 1 in our last model, is allowed to be estimated here. In fact, it is estimated at .79.

We can extract the model coefficients in the usual way:

Anyway – we now plot the regression. We set up a time axis running from 0 to 150 (the number of days). However, we include small increments of 0.1 in order to create a smooth appearance to our plot. We will evaluate the model on these values and then use those values to plot the model.

Anyway – we now plot the regression. We set up a time axis running from 0 to 150 (the number of days). However, we include small increments of 0.1 in order to create a smooth appearance to our plot. We will evaluate the model on these values and then use those values to plot the model.

Now we use the predict() function to set up the fitted model values.

The graph shows a non-linear decrease in cases with number of days. Of course, instead of taking the exponential of the fitted values, we could also have used the predict() function together with the argument type = “response”. 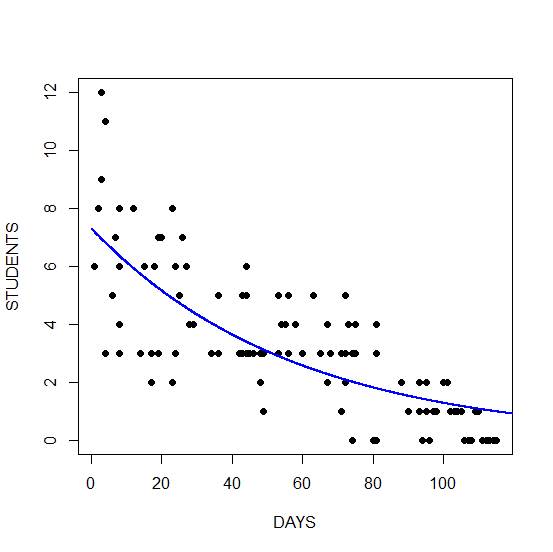 Let’s calculate the impact on the number of cases arising from a one day increase along the time axis. First we take the exponential of the coefficients.

We calculate the 95% confidence interval (upper and lower confidence limits) as follows:

We can calculate the change in number of students presenting with the disease for each additional day, as follows:

The reduction (rate ratio) is approximately 0.02 cases for each additional day.

See our full R Tutorial Series and other blog posts regarding R programming.

About the Author: David Lillis has taught R to many researchers and statisticians. His company, Sigma Statistics and Research Limited, provides both on-line instruction and face-to-face workshops on R, and coding services in R. David holds a doctorate in applied statistics.