Let’s look at an example.

A school district was interested in how many children in their sixth grade classes played on organized sports teams. So they did a count and also noted the gender of the child. The results were put into a table:

We don’t usually focus on these ratios in a 2×2 table. Instead, the focus is on the proportions.

The school district superintendent decided to get fancy and create a statistical model. Because we counted the number of boys and girls who played or didn’t play sports, the superintendent suggested we use a count model.

The frequency for each of the four groups (gender by played sports) was the count model’s outcome variable. Our two predictor variables were gender and whether the child played sports.

Not knowing which type of count model to run, the superintendent decided to use a Poisson model. Here are the results:

Here is the statistical software generated two-way table between gender and played sports: 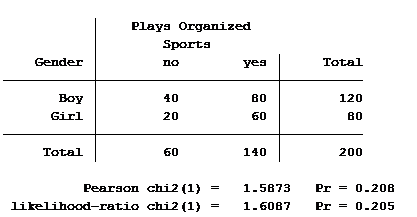 What do you notice from the results?

The incidence rate ratio (IRR) for girl’s is 0.6667. This is the same as the ratio of girls to boys in the table.

What else do we find?

For a categorical variable with more than two categories, the IRR is the ratio of the expressed category to the base category.