When we run a statistical model, we are in a sense creating a mathematical equation. The simplest regression model looks like this:

The left side of the equation is the sum of two parts on the right: the fixed component, β0 + β1X, and the random component, εi.

You’ll also sometimes see the equation written about the mean or expected value of Y on the left and only the fixed component on the right:

All we’ve done is remove that random component from both sides to focus on the fixed portion. Why?

In linear regression, we assume that probability distribution is normal.  But there are a lot of outcome variables for which a normal distribution doesn’t fit.

Generalized linear models allow a few other distributions, including Poisson, binomial, and Gamma (among others).

But in order to make the model fit in a linear form for these other distributions, we often need to take some function of the mean. That second equation above doesn’t fit.

In generalized linear models, there is a link function, which is the link between the mean of Y on the left and the fixed component on the right.

It’s very possible you have run models without being aware of this. Some software packages have models (e.g., Stata’s nbreg or SAS proc logistic) that use a default link function.

But if you run a generalized linear model in a more general software procedure (like SAS’s proc genmod or R’s glm), then you must select the link function that works with the distribution in the random components.

Here are two versions of the same basic model equation for count data:

There are several link choices for each probability distribution. The table below shows the potential combinations allowed in Stata. 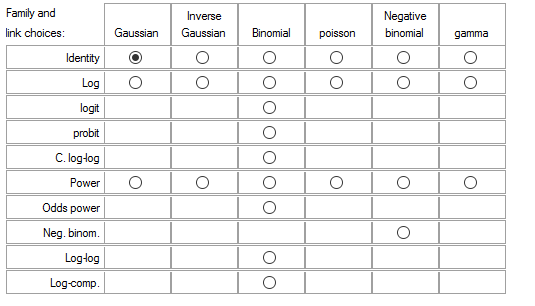 But there is generally a best fitting link for each distribution, the canonical link. Be sure to choose the best fit.